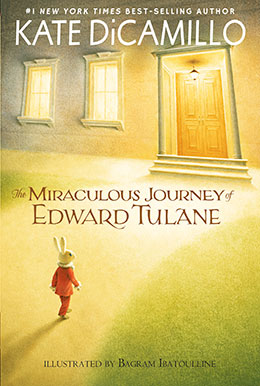 The Miraculous Journey of Edward Tulane

Once, in a house on Egypt Street, there lived a china rabbit named Edward Tulane. The rabbit was very pleased with himself, and for good reason: he was owned by a girl named Abilene, who treated him with the utmost care and adored him completely. And then, one day, he was lost.

Kate DiCamillo takes us on an extraordinary journey, from the depths of the ocean to the net of a fisherman, from the top of a garbage heap to the fireside of a hobos camp, from the bedside of an ailing child to the bustling streets of Memphis. And along the way, we are shown a true miracle: even a heart of the most breakable kind can learn to love, to lose, and to love again.

“But a story for today about a toy rabbit? Okay, I thought, Kate DiCamillo can make me cry for a motherless child and a mongrel stray. She can wring my heart following the trials of two lonely children and a caged tiger, and bring tears to my eyes for a brave little lovesick mouse, but why should I care what happens to an arrogant, over-dressed china rabbit? But I did care, desperately, and I think I can safely predict you will, too.” (Katherine Paterson, in Publishers Weekly)

This achingly beautiful story shows a true master of writing at her very best. Edward Tulane is an exceedingly vain, cold-hearted china rabbit owned by 10-year-old Abilene Tulane, who dearly loves him. Her grandmother relates a fairy tale about a princess who never felt love; she then whispers to Edward that he disappoints her. His path to redemption begins when he falls overboard during the family’s ocean journey. Sinking to the bottom of the sea where he will spend 297 days, Edward feels his first emotion—fear. Caught in a fisherman’s net, he lives with the old man and his wife and begins to care about his humans. Then their adult daughter takes him to the dump, where a dog and a hobo find him. They ride the rails together until Edward is cruelly separated from them. His heart is truly broken when next owner, four-year-old Sarah Ruth, dies. He recalls Abilene’s grandmother with a new sense of humility, wishing she knew that he has learned to love. When his head is shattered by an angry man, Edward wants to join Sarah Ruth but those he has loved convince him to live. Repaired by a doll store owner, he closes his heart to love, as it is too painful, until a wise doll tells him that he that he must open his heart for someone to love him. This superb book is beautifully written in spare yet stirring language. The tender look at the changes from arrogance to grateful loving is perfectly delineated. Ibatoulline’s lovely sepia-toned gouache illustrations and beautifully rendered color plates are exquisite. An ever-so-marvelous tale. (School Library Journal, starred review)

As she did in her Newbery Medal Book, The Tale of Despereaux (2004), DiCamillo tucks important messages into this story and once more plumbs the mystery of the heart—or, in this case, the heartless. Edward Tulane is a china rabbit with an extensive wardrobe. He belongs to 10-year-old Abilene, who thinks almost as highly of Edward as Edward does of himself. Even young children will soon realize that Edward is riding for a fall. And fall he does, into the sea, after mean boys rip him from Abilene’s hands during an ocean voyage. Thus begins Edward’s journey from watery grave to the gentle embrace of a fisherman’s wife, to the care of a hobo and his dog, and into the hands of a dying girl. Then, pure meanness breaks Edward apart, and love and sacrifice put him back together—until just the right child finds him. With every person who touches him, Edward’s heart grows a little bit softer and a little bit bigger. Bruised and battered, Edward is at his most beautiful, and beautiful is a fine word to describe the artwork. Ibatoulline outdoes himself; his precisely rendered sepia-tone drawings and color plates of high artistic merit are an integral part of this handsomely designed package. Yet even standing alone, the story soars because of DiCamillo’s lyrical use of language and her understanding of universal yearnings. This will be a pleasure to read aloud. (Booklist, starred review)