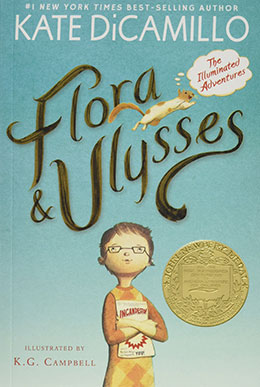 It begins, as the best superhero stories do, with a tragic accident that has unexpected consequences.

The squirrel never saw the vacuum cleaner coming, but self-described cynic Flora Belle Buckman, who has read every issue of the comic book Terrible Things Can Happen to You!, is the just the right person to step in and save him. What neither can predict is that Ulysses (the squirrel) has been born anew, with powers of strength, flight, and misspelled poetry—and that Flora will be changed too, as she discovers the possibility of hope and the promise of a capacious heart.

Newbery-winner DiCamillo is a master storyteller not just because she creates characters who dance off the pages and plots, whether epic or small, that never fail to engage and delight readers. Her biggest strength is exposing the truths that open and heal the human heart. She believes in possibilities and forgiveness and teaches her audience that the salt of life can be cut with the right measure of love. (Booklist, starred review)

Despite supremely quirky characters and dialogue worthy of an SAT prep class, there’s real emotion at the heart of this story involving two kids who have been failed by the most important people in their lives: their parents. (Publishers Weekly, starred review)

Rife with marvelously rich vocabulary reminiscent of the early superhero era (e.g., “Holy unanticipated occurrences!”) and amusing glimpses at the world from the point of view of Ulysses the supersquirrel, this book will appeal to a broad audience of sophisticated readers. There are plenty of action sequences, but the novel primarily dwells in the realm of sensitive, hopeful, and quietly philosophical literature. (School Library Journal, starred review)

conversation with the author