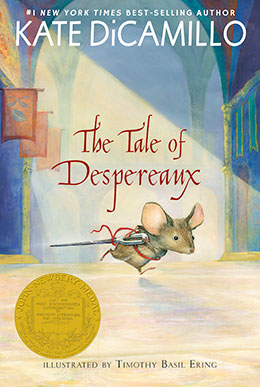 The Tale of Despereaux

Kate DiCamillo introduces a hero for all time!

Welcome to the story of Despereaux Tilling, a mouse who is in love with music, stories, and a princess named Pea. It is also the story of a rat called Roscuro, who lives in the darkness and covets a world filled with light. And it is the story of Miggery Sow, a slow-witted serving girl who harbors a simple, impossible wish. These three characters are about to embark on a journey that will lead them down into a horrible dungeon, up into a glittering castle, and, ultimately, into each other’s lives. And what happens then? As Kate DiCamillo would say: “Reader, it is your destiny to find out.”

Forgiveness, light, love, and soup. These essential ingredients combine into a tale that is as soul stirring as it is delicious. Despereaux, a tiny mouse with huge ears, is the bane of his family’s existence. He has fallen in love with the young princess who lives in the castle where he resides and, having read of knights and their ladies, vows to “honor her.” But his unmouselike behavior gets him banished to the dungeon, where a swarm of rats kill whoever falls into their clutches. Another story strand revolves around Miggery, traded into service by her father, who got a tablecloth in return. Mig’s desire to be a princess, a rat’s yen for soup (a food banished from the kingdom after a rat fell in a bowl and killed the queen), and Despereaux’s quest to save his princess after she is kidnapped climax in a classic fairy tale, rich and satisfying. Part of the charm comes from DiCamillo’s deceptively simple style and short chapters in which the author addresses the reader: “Do you think rats do not have hearts? Wrong. All living things have a heart.” And as with the best stories, there are important messages tucked in here and there, so subtly that children who are carried away by the words won’t realize they have been uplifted until much later. Ering’s soft pencil illustrations reflect the story’s charm. (Booklist, starred review)

The melodramatic voice of the narrator glides through DiCamillo’s entirely pleasing tale … And so unwinds a tale with twists and turns, full of forbidden soup and ladles, rats lusting for mouse blood, a servant who wishes to be a princess, a knight in shining—or at least furry—armor, and all the ingredients of an old-fashioned drama. (Kirkus Reviews, starred review)